Understanding Abdominal (Belly) Fat. Use it to Lose it. 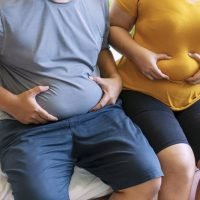 In my day to day endocrinology practice one of the first complaints I hear from people, no matter what the medical problem, is about weight. Almost always, it is either because they are gaining or unable to lose it. When I began my medical practice 40 years ago, this was also the case. What is it about weight that prevents more progress from being made? Could it be because in nature having adequate amounts of stored fat on the body eg belly fat,  is essential for survival in the same way having gasoline in the fuel tank of a car is needed to keep it going? Not to mention the role of fat as an insulator against the cold. Imagine trying to live through a winter without clothes, the way primitive humans did? Being covered in fat was literally a lifesaver. The more we know about the role of fat (adipose) in our lives the better we are equipped to live with (and without) it.

It’s tempting to think that all fat is built the same, but this is not true.

There are actually three types of fat; white, brown, and beige fat, and they are distributed in different parts of the body in different proportions, as either visceral fat (inside the body and organs) or subcutaneous fat (under the skin).

White fat is the fat most people are familiar with – over 73.2% of all Americans carry too much and are classed as either overweight or obese (CDC, 2017 to 2018). While some white fat is absolutely essential for a healthy metabolism, every body has its limits.

Brown fat is found mainly in babies and plays a key role in providing energy and keeping us warm. Adults retain a small percentage of brown fat around their necks and shoulders.

Beige, or brite fat, is similar to brown fat and is optimized for burning fat rather than storing it, unlike white fat.

As we can see, white fat is the ‘bad stuff,’ and is the type of fat that many of us worry about.

Fat is distributed as either visceral or subcutaneous fat, and there is a big difference between the two.

While people with different body compositions will likely carry different percentages of subcutaneous fat, everyone has their limits. Subcutaneous fat is not totally harmless, but it poses fewer risks than visceral fat.

Visceral fat is stored primarily around and inside the abdomen. Yes – fat is more than skin deep and is stored inside of us as well as under our skin.

Whilst excess subcutaneous fat is still unhealthy, many recent and reputable studies such as this large-scale meta-analysis of 2.5 million participants suggest that visceral fat poses a much greater health risk than subcutaneous fat.

The increased health risk of visceral fat is linked to its proximity to the vital organs.

The closer fat is to the stomach and abdomen, the greater the chance is that it penetrates under the skin, wrapping itself around the liver, heart, kidneys, pancreas, and other organs. A study conducted by the University of Chicago and published in 2016 also found that visceral fat behaves differently from subcutaneous fat and resists fat burning (lipolysis). This also explains why abdominal fat is seen as ‘stubborn fat’ that is hard to lose.

Visceral fat poses a much greater risk than subcutaneous fat in developing in the following conditions:

How to Measure Visceral Fat

Traditionally, BMI (body mass index) has been the go-to yardstick for measuring body fat. Today, many health authorities encourage the use of both BMI and abdominal fat measurements. The measurement of waist circumference is a popular method to assess abdominal fat. It’s possible to have a healthy BMI and high waist measurement, and vice-versa.

This is Harvard Health’s technique for measuring visceral, or abdominal fat:

Does Abdominal or Visceral Fat Increase With Age?

The short answer is yes, it does. The plight of the so-called beer belly or middle-age spread is real!

This study published in the International Journal of Body Composition Research found that visceral fat increased by over 200% in men and 400% in women between the age of 30 and 70.

As we age, our metabolism changes and slows down, but the ‘middle-age spread’ is also linked to changes in behavior and diet.

We’ve covered these changes in detail here in the article What is Metabolism and How Does it Change With Age?

To briefly summarize, aging reduces our percentage of lean muscle mass, which lowers our metabolic rate. Additionally, whilst it’s perhaps natural to indulge a little more as we get older, it’s easy to eat more and exercise less. That gives your body every excuse to pile on that abdominal fat!

Studies have shown that estrogen plays a major role in body fat distribution, hence why women experience a much greater change in visceral fat with age due to menopause accompanied by the loss of estrogen (400% vs 200% in men between the ages of 30 and 70).

“If women gain weight after menopause, it’s more likely to be in their bellies,” – Michael Jensen, M.D., professor of medicine at Mayo Clinic.

Namely, ERT can increase the risk of blood clots leading to strokes and embolisms and cause headaches, swelling, or edema. ERT is also often linked to an increased risk of breast and ovarian cancer. It is worth mentioning however, studies reviewed by Breastcancer.org show that the risk is only significant after using ERT 10 years or more (in the case of estrogen-only therapy). Combination HRT which includes both estrogen and progesterone poses a much greater risk.

As such, ERT is certainly not a ‘silver bullet’ for treating menopause-related abdominal weight gain.

Part 2 of this article will be published in 2 weeks at this website www.metabolism.com

DISCLAIMER: THIS WEBSITE, www.metabolism.com, DOES NOT PROVIDE MEDICAL ADVICE

The information, including but not limited to, text, graphics, images and other material contained on this website are for informational purposes only. No material on this site is intended to be a substitute for professional medical advice, diagnosis or treatment. Always seek the advice of your physician or other qualified healthcare provider with any questions you may have regarding a medical condition or treatment and before undertaking a new health care regimen, and never disregard professional medical advice or delay in seeking it because of something you have read on this website.