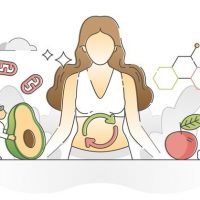 It’s tempting to think that our bodies simply ‘slow down’ as we age, which makes it harder to keep weight off, but a study of 6,600 people aged between one week old to 95-years-old revealed that it’s not as simple as one might assume.

In our prior post, we defined what metabolism really is (a mixture of at least 3 different processes), so we can now move on to discussing how these processes change as we age.

But here’s the surprise; instead of our total daily expenditure slowing gradually from say, the age of 30 onwards, it tends to remain very stable until the age of 50 or 60. After then, it decreases only slightly, by around 0.7% per year.

“Some people think of their teens and 20s as the age when their calorie-burning potential hits its peak…But the study shows that, pound for pound, infants have the highest metabolic rates of all.” – Dr. Katzmarzyk, Professor and Associate Executive Director for Population and Public Health Sciences at the Pennington Biomedical Research Center.

In essence, what this study shows is that the metabolism – and total energy expenditure – slows over time because of a mixture of factors, and not just because of age only. In other words, many people gain weight as they age for reasons other than what is often simply described as “the body slows down as you age”.

If you’re struggling more with your weight as you age, there are probably a few different things going on.

1: Your Diet Has Changed

Diets can change in either direction with age, they might vastly improve as we realize the benefits of a healthy diet, or they might slip deeper and deeper into bad habits and indulgence!

What we do know is that a high-fat, low-protein diet lowers the thermic effect of food, which means that more excess calories end up deposited as fat.

A 2016 study from Purdue University found that a high-protein diet can boost the metabolism, boosting energy expenditure by around 100 calories per day. That’s 100 calories you’re losing for free, without moving, simply by eating high protein foods. For how long the increase in calorie burning by high protein diet lasts, is not clear, however.

Grabbing a shelf full of protein supplements in your 50s, 60s, or 70s is probably not required.

The following is a list of natural high-protein foodstuffs to consider:

Next up, it’s all too easy to start moving less with age. Rather than low-level exercise, it’s usually the more vigorous activities that start getting neglected with age.

Exercise demands remain quite consistent throughout life, and it’s generally now recommended that older adults up to the age of around 50 to 60 commit to a similar exercise regime as those aged much younger. The older we become however, limitations on exercise duration and intensity are imposed by illness and degenerative conditions such as arthritis, heart and lung disease and whatever injuries have occurred over the years.

Web MD recommends a considerable 150 minutes of moderate cardio spread over 3 days or more, which is what the CDC recommends for all adults who are medically able.

A strong body of research has also found that more rigorous exercise like high-intensity interval training can protect seniors from an array of diseases whilst bolstering their metabolism. It is strongly advised, particularly in older individuals, that before stepping up your exercise regime to always consult a physician prior to starting.

It’s possible to fight against muscle loss by engaging in strength and resistance training in addition to your standard exercise regime. Follow a strength or resistance training plan approved by a professional, aimed at your age group and skill level and always take things slowly at the start.

4: Your Hormone Levels Have Changed

The hormone levels of both men and women progressively change with age.

Whilst men obviously do not experience anything like the level of hormone change that comes with female menopause, they may still experience somewhat of a “male menopause” which involves the loss of testosterone often beginning during the 50’s. Obesity in men is also associated with lower testosterone levels, creating a vicious cycle of increasing obesity causing lower testosterone which then inhibits the ability to lose weight, and so on.

Some herbs and supplements are also suggested to support metabolic hormones – Ginseng, Maca, and Ashwagandha are amongst those that show the most promising preliminary evidence, though large-scale studies are still lacking.

Summary: How Getting Older Affects Your Metabolism

Age does affect the metabolism, but it’s not as simple as your body just “slowing down” as you get older – and we are not powerless to stop it!

We have greater control over our metabolism than generally assumed and making just a handful of small changes might be all it takes to beat the “middle-aged spread”.

Considering all 3 components of the metabolism – BMR, TEF, and TEE – helps target strategies aimed at improving each, such as switching to a high-protein diet to increase calorie burning during eating, increasing exercise, and also supporting hormone function, and increasing lean muscle mass to boost BMR.

A combined, holistic approach provides a much better outcome than focusing on just one part of the metabolism in isolation of the others.

Disclaimer: This and all articles at www.metabolism.com are for educational purposes only and are not intended as medical advice or treatment. By choosing to view this article you agree to the Terms of Use of Metabolink, Inc which can be found at https://metabolism.com/terms-of-service-and-our-privacy-policy/