What is Metabolism and How Does it Change with Age? 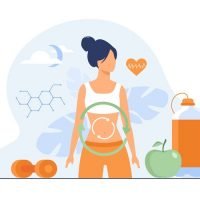 What is Metabolism and How Does It Change with Age?

Our bodies undergo many transitions as we age, some good and some not so good!

In the latter category of “not so good”, many people tend to struggle more with their weight as they get older. Obesity rates are higher in older populations, and in the United States, more than 30% of both men and women over 60 are obese.

Obesity in older age brings about much of the same risks as it does at any age, including an increased risk of heart disease, diabetes, high blood pressure, stroke, and mobility problems, and the risks climb ever higher with each year that goes by!

Unraveling what happens to our metabolism as we age helps provide strategies for staying healthy and reducing the risks of putting on excess weight. The popular consensus is that, as we age, our bodies ‘slow down’, which makes it tougher to keep weight off, but does that really tell the whole story?

At its most fundamental, metabolism encompasses every chemical process required to sustain life. It’s easy to confuse the entire concept of metabolism with just the basal metabolic rate (BMR) alone, but this is just one component of metabolism.

Many people use the terms interchangeably, whereas, in fact, there are three main components to metabolism:

The body is in constant motion, so even when we’re totally sedentary, sleeping, or otherwise at rest, we require energy and nutrients to function correctly.

So long as the heart pumps, the lungs breathe and the body and its organs go about their business growing and repairing cells, we are utilizing energy in one form or another, and this is our basal metabolic rate (BMR).

The BMR varies depending on the following factors:

The consumption of food itself requires energy and some foods are much easier to digest than others.

It takes considerable effort for our bodies to move food through the digestive system, and our body also needs to absorb and transport nutrients from that food, which further requires energy.

A concept that tends to pop up in various diet plans is ‘calorie negative food’ – that is food that burns more calories to digest than they provide as food. Sadly, there is no evidence that we can ‘eat ourselves thin’ by consuming calorie-negative food!

TEF varies considerably depending on the food consumed and its macronutrients content:

Overall, TEF accounts for around 5 to 10% of our daily energy demands. This is increased when we consume a high-protein and low-fat diet.

Thirdly, our body requires energy to sustain movement and exercise. This is highly variable and obviously depends on physical activity levels – the more we move, the more energy we require to breathe, fuel our muscles, and repair cells.

Common estimates suggest that physical exercise uses between 15% and 30% of average daily energy expenditure. Engaging in intense or protracted physical exercise ( such as running a marathon) will increase that figure.

The total accumulative energy required for these 3 metabolic components – BMR, TEF, and TEE, makes up our total daily energy expenditure.

In Part 2 of this article, we will cover how aging affects our metabolism and what we can do about it. Check back at metabolism.com for the publication date.

Disclaimer: This and all articles at www.metabolism.com are for educational purposes only and are not intended as medical advice or treatment. By choosing to view this article you agree to the Terms of Use of Metabolink, Inc which can be found at https://metabolism.com/terms-of-service-and-our-privacy-policy/