Coconut Milk as Health Food? You’ve Got to Be Kidding. 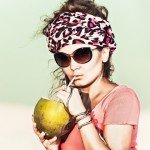 Much as has been said recently about the health benefits of coconut milk and coconut oil. Coconut milk is a white liquid mixture of water and the white â€œfleshâ€ of the coconut and is considered a more diluted form of coconut oil a thick clear liquid. Coconut extracts have been used in commercial food products, non-dairy creamers and cooking for many years but lately there has been a burst of publicity for coconut oil and milk as a new form of health-food with beneficial properties including increasing energy, preventing cancer and speeding weight loss.  I have seen it being added to ice cream and even bottled water. I want to sound a note of warning here.

Most physicians and nutritionists will advise against having too much fat in the diet for a number of reasons. First, and most obvious, fats have lots of calories. In addition dietary fat can increase the bad cholesterol (LDL) content of the blood leading to increased risk of heart attack and stroke. Among the different kinds of fat that raise LDL the worst are the saturated fats. One tablespoon of coconut oil contains about 120 calories with about 90% of the coconut oil being saturated fat.  In fact the saturated fat, palmitic acid, takes its name from the plant that produces coconuts, the palm tree. Compare this to the fat in dark chocolate which is 30% oleic acid, the healthy monounsaturated fat found in olive oil.

Oils which are far more beneficial for preparing foods are unsaturated fats including the monounsaturated and polyunsaturated fats. I like canola, safflower and olive oil due to their high content of these healthier fats.

Coconut oil has many other applications which are useful outside the body. It can be used as a diesel fuel, deodorant, insect repellent, to make soap, and as a moisturizer for hair and skin.  My advice is to think twice however, before supplementing your diet with it.