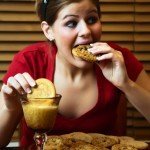 The old saying, â€œThe way to a manâ€™s heart is through his stomachâ€ implies there is a deep connection between emotions and eating. My guess is Â no one is really surprised by this idea. Both men and woman can identify ways in which their mood and appetite are intertwined and it is no mere quirk of manâ€™s personality that this is true.

Evolution tells us that we were born to eat. The earliest creatures in the worldâ€™s history were simple eating machines. Their bodies consisted of an entrance for food, a digestive tract and an exit for refuse. In order to become more efficient at getting food creatures developed a system to locate food and to move toward it. This system is known as a nervous system. The first creature to have this ability is the worm. Eventually the nervous system controlling the digestive system (enteric nervous system) began to sprout nodes which were early brains.Â  As time went on and the brain became better developed it split off from the nervous system that controlled the digestive tract. Everything that followed in evolution, has served the purpose of developing Â increasingly efficient brains (central nervous system) for acquiring the fuel of life.

Another example of how deeply connected the gut and brain are, is to look at the development of the fetus. When a human fetus is still just a lump of jelly, the digestiveÂ  and nervous systems are one structure. Soon this organ splits into two, one to become our gastrointestinal tract and the other the brain and spinal cord (central nervous system). Even though they become physically separated the chemical signals used by the gut and nervous system remain virtually identical. These chemicals comprise the groups known as neurotransmitters and hormones.

The same chemicals in the digestive tract that cause the intestines to twist and convulse (peristalsis), in the brain stimulate the emotion of anxiety. This explains why people get “butterflies” in the stomach or diarrhea when they are nervous.Â  The brain chemicals involved in depression can cause constipation. Â The syndrome of irritable bowel disease (IBS) with its cycles of diarrhea and constipation is thought to be a reflection of an emotional rollercoaster. Â The chemical relationship between mood and appetite is even more complex but no less real. One of the most common side effect of mood altering drugs is increased appetite and weight gain. Just ask anyone who has been on an anti-depressant drug such as Prozac, Zoloft or Abilify. Â The chemical in marihuana that gets people high is famous for triggering the eating binge called “the munchies”.

Appetite suppressant drugs often have effects on mood and can be the source of major side effects. One new generation of appetite suppressants being developed, Acomplia, failed to be approved by the FDA because it caused severe depression and suicidal thinking.

In the next part of this series we will look at ways we can influence the brain to control our appetite.