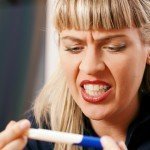 In part one of this series we looked at the cause of polycystic ovarian syndrome (PCOS) and the many complications it causes. Weight gain, acne, excess hair growth on the face and body,  high cholesterol and high blood sugar due to insulin resistance are among the problems associated with PCOS.  One particular area of concern for PCOS sufferers is infertility due to lack of ovulation. PCOS is the cause of anovulatory infertility in  3 out of 4 cases. Before the acceptance of medical therapy for infertility due to PCOS  a surgical approach referred to as a wedge resection of the ovary was performed which allowed patients with PCOS to ovulate and conceive normally. Low success rates with this procedure, complications of surgery and improved medical therapies have all resulted in the end of this type of treatment in most situations.  At present, treatment of infertility associated with PCOS generally consists of using a drug to combat insulin resistance known as metformin often in combination with the fertility drug clomid, which has a high rate of success.

Treatment of the excess hair growth associated with PCOS often consists of using the drug spironalactone and the use of birth control pills. Spironalactone is a very interesting drug used for decades as a salt depleting diuretic but also has an effect to block the action of the male hormone testosterone. The action of spironalactone to block testosterone was discovered when it was noticed that men using this diuretic developed tender nipples and breast enlargement (gynecomastia). Oral contraceptive agents are also useful to combat hirsutism because these agents also cause reduce testosterone levels by putting the ovary in a dormant “resting” state.  Cosmetic procedures are always another option to treat unwanted hair growth. Laser hair removal appears to be replacing the older modality of electrolysis for this purpose.

Can PCOS be cured? Once PCOS develops it can be controlled but not cured unless the ovaries are removed. At menopause  PCOS-related problems diminish as the ovary stops making sex hormones including testosterone which is one of the culprits during the reproductive years. A recent study published this year in the journal Pediatric Endocrinology showed that using metformin treatment in pre-adolescent girls thought to be at risk for PCOS reduces the risk and/or the severity of PCOS in later years. It may do this by blocking fat accumulation in the abdomen and liver which seems to set off the insulin resistance. Metformin is not FDA approved for this purpose and as a generic drug there is little profit potential in developing this treatment. I expect it will be many years before preventive therapy for PCOS will come before the FDA for approval .

This information is strictly for educational purposes. Due to high risk of toxicity of medical therapy in young women who can potentially become fertile under treatment for PCOS, no drug should be taken without the close supervision of a physician. The reader agrees to the Terms of Service of this website, metabolism.com